Most of us think that work life earning may not be sufficient for old age, or say, will have meager valuation in the next 20-30 years. On top, People are concerned about losing their jobs due to technology-assault and super-speed automation.
How much of this will prove to be true? To find this, I conducted detailed research and published few papers. This blog is synopsis of all.

Two factors will impact our earning capacity (rather negatively):


Two factors that will reduce the cost of livelihood (positive effect):
There shall be continued tussle between both sets of factors (above).

Automation and AI is no longer buzz word. Effects are visible across the board, will spread to every possible sector eventually. Despite best efforts by society champions (read politician), socio-economy divide will continue to hound masses. In anticipation, countries like Finland and Canada are running experiments to pilot the idea of "universal basic income" — the unconditional provision of a regular sum of money from the government to support basic living irrespective of employment status.

This blog is dedicated to the argument “Democratization of Technology” - which means, access to 'technology-endpoints' (products and services) will plummet  abruptly, rendering it almost FREE.

As a Business Leader, understanding of this trend and its implications is important. Because, this is connected to Customer buying behavior and how it will transition in the next 10, 20, 30 years.

Cnsumer Spending Pattern
A recent UAE government data* as well as IMF report* (July 2016) show similar patterns in household spend distribution. As expected, housing takes the lion share at 40%, 13% on Food & Beverage, 10% on Transportation, 6% on healthcare, and 5% on Entertainment. In other words, about 74% of UAE residents' expenditures go to housing, food, transportation, health and entertainment.

Spending habits around the world tell a pretty consistent story — we tend to spend money on many of the same basic products and services. Based on IMF data from four large economies: USA, UK, China, and India, majority of expenditures are in these top 6 categories:
1.     Housing
2.     Food
3.     Transportation
4.     Healthcare
5.     Education
6.     Entertainment

Now, think... what if the cost all the above 6 items plummet with time. There is compelling case behind this hypothesis, which I shall come back after next 2 paragraphs.

It is not the first time, this will happen.
Example - Telecommunication:
IMF 2000 millennium data shows - on an average a typical household spent 7% of its income on communication. With the advent of WhatsApp, Skype, Hangout, Facetime etc. this is practically free for anyone carrying the most basic smartphone and internet connection. We democratized communication channels. Whether you are a billionaire or a poor on road, has same quality of communication service – FREE.
Ref: https://www.imf.org/external/country/ARE/

One can think of many similar examples – On the consumer front, examples are photography, publication, entertainment, job market etc. that were accessible only to rich before, is nearly free now. On the business front, there are players who have democratized the once monopolistic nature of businesses – AirBnb x Hotel industry, Uber x Taxi.

In fact, as we speak… we are actually using more a million dollar stuff Free. We have taken them for granted.

This is How –
See chart below. Most of us would have purchased these products and services some point in time. Those in 40s and 50s can relate better. Combined cost is nearing 1 million USD. Today every one of us are using same product and services – almost Free. So strange, in todays’ world we do not value these at all. Our expectations have changed, rightly so because in a democratic paradigm things are taken for granted.

Think about what drives high housing costs. Why does a single-family apartment in downtown cost $10 million, while the same square footage on the outskirts of city can be purchased for $100,000?

Location. Location. Location. People flock to high-density, desired areas near the jobs and the entertainment. This market demand drives up the price.
Housing sector will democratize for two reasons: The first reason is because of two key technologies which make the proximity of our home to our job irrelevant, meaning one can live anywhere (specifically, where the real estate is cheap):
(a) Autonomous Cars: If your commute time can become time to read, relax, sleep, watch a movie, have a meeting — does it matter if your commute is 60 minutes?
(b) Virtual Reality: What happens when your workplace is actually a virtual office where your co-workers are avatars? When you no longer need to commute at all. You wake up, plug into your virtual workspace, and telecommute from the farm or from the island of Azure.

The second technology drivers are robotics and 3D printing, which will democreatize the cost of building structures.
3D printing has slowly gone from a curious novelty to a totally viable option for creating all kinds of useful things, from chocolate to athletic shoes, and now MIT has invented a way to use the technology to print buildings, too. Given that most 3D printing takes place inside a sealed box, it might be a bit hard to imagine exactly how a structure could be built in such a way, but as you’ll see it can most definitely be done. (MIT printer picture below).

A number of players in the market are now exploring how 3D printed structures and buildings can dramatically reduce the cost of construction and the amount of time it takes to build a building. 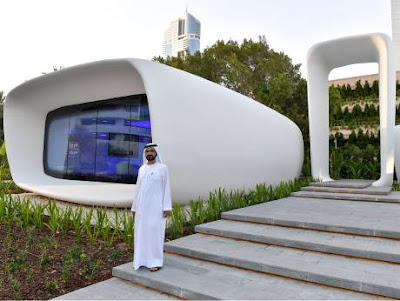 FPO and USDA data suggest that the cost of food cooked at home has dropped by 55%. (Cost of food in restaurant has however increased for obvious reasons). 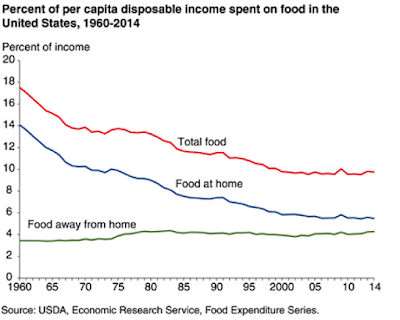 Additional gains will be made as we learn to efficiently produce foods locally through vertical farming (note that 70% of food's final retail price comes from transportation, storage and handling).
Also, as we make genetic and biological advances, we will learn how to increase yield per square meter.
III. Transportation

The automotive market (a trillion dollars) is being democratized by startups like Uber. But this is just the beginning. When Uber rolls out fully autonomous services, your cost of transportation will plummet.
Think about all of the related costs that disappear: auto insurance, auto repairs, parking, fuel, parking tickets. Your overall cost of "getting around" will be 5 to 10 times cheaper when compared to owning a car.

This is the future of "movator as a service."
Ultimately, the poorest people on Earth will be chauffeured around !

Healthcare can be roughly split into four major categories: (i) diagnostics, (ii) intervention/surgery, (iii) chronic care, and (iv) medicines.
(i) Diagnostics: AI has already demonstrated the ability to diagnose cancer patients better than the best doctors, image and diagnose pathology, look at genomics data and draw conclusions, and/or sort through gigabytes of phenotypic data… all for the cost of electricity.
(ii) Intervention/Surgery: In the near future, the best surgeons in the world will be robots, and they'll be able to move with precision and image a surgical field in high magnification. Each robotic surgeon can call upon the data from millions of previous robotic surgeries, outperforming the most experienced human counterpart. Again, with the cost asymptotically approaching zero.
(iii) Chronic/Eldercare: Taking care of the aging and the chronically ill will again be done most efficiently through robots.
(iv) Medicines: Medicines will be discovered and manufactured more efficiently by AIs and, perhaps in the near future, be compounded at home with the aid of a 3D printing machine that assembles your perfect medicines based on the needs and blood chemistries in that very moment.
It's also worth noting the price of genomics sequencing is plummeting (as you'll see below, at five times the rate of Moore's Law). Accurate sequencing should allow us to predict which diseases you're likely to develop and which drugs are of highest use to treat you. 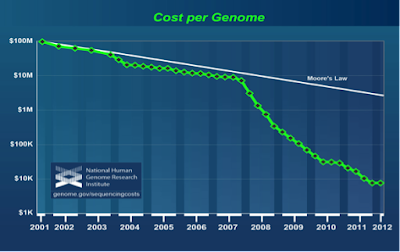 Education has already been democratized in many respects, as most of the information you'd learn in school is available online for free.
Coursera, Khan Academy, and schools like Harvard, MIT and Stanford have thousands of hours of high-quality instruction online, available to anyone on the planet with an Internet connection.
But this is just the beginning. Soon the best professors in the world will be AIs able to know the exact abilities, needs, desires and knowledge of a student and teach them exactly what they need in the best fashion at the perfect rate.
Accordingly, the child of a billionaire or the child of a pauper will have access to the same (best) education delivered by such an AI, effectively for free.

Entertainment (video and gaming) historically required significant purchases of equipment and services.
Today, with the advent of music streaming services, YouTube, Netflix and the iPhone App Store, we're seeing an explosion of available selections at the same time that the universe of options rapidly demonetizes.
YouTube has over a billion users — almost one-third of all people on the Internet — and every day, people watch hundreds of millions of hours on YouTube and generate billions of views.
Posted by Sanjeet Kumar at 12:21 PM